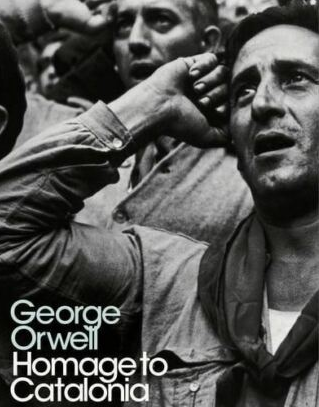 Another Orwell book that has left me with mixed feelings.

Not that I was expecting my favourite dystopian author’s personal experience of the Spanish Civil War to be historically accurate, or the prose was lacking in some way. No, it’s the faint whiff of ‘pull up a sandbag’ about the account.

My fellow veterans will know what I’m talking about – there was something not quite right about the recollections, some of which, for me, tipped dangerously towards ‘stolen valour’ territory.

For example, why mention being in hand-to-hand combat ‘only once’ without elaborating on the ordeal? Fighting with just a knife or one’s bare hands is not something quickly forgotten. And no, chasing one of Franco’s soldiers through a trench system, bayonets fixed, doesn’t count. ‘We were ordered not to shoot’. Really? With the raid in full swing, the target in plain sight and the enemy unlikely to be fighting under the same rules of engagement? Hmmm.

Not that Orwell needed to do a Hemingway and embellish his wartime experiences. Personally, I would be dining out on surviving a bullet through the neck every chance I got, even if it was my own stupid fault. Indeed, it is the frankness of this account that makes the absence of detail elsewhere all the stranger.

Still, the legacy of Homage to Catalonia never was in its accuracy, but in how Orwell’s experience of the war went on to shape his two most famous novels – the Soviet betrayal of the Marxist cause being central to Animal Farm, while it’s the complete absence of Big Brother’s left/right roots that makes 1984 so politically intriguing. Had Orwell become disillusioned with Marxism? The former novel would seem to imply some loss of faith, most noticeably at the end when the titular characters are unable to differentiate between the pigs and the farmers.

I often wonder if Orwell’s bitter disappointment in not only failing to defeat fascism in Spain but realising the left can be just as tyrannical, sucked out any remaining hope the great man had for humankind’s emancipation – the avowed democratic socialist choosing to end his days as a committed nihilist instead. After all, history would seem to suggest that no matter who frees you from tyranny, your saviour is certain to become your oppressor.

1984 even supports the theory – chiefly in O’Brien’s words, “If you want a picture of the future, imagine a boot stamping on a human face—forever.”